As with most websites Column Rads uses cookies. In order to give a personalised, responsive service and to improve the site, we remember and store information about how you use the site. This is done using cookies which are simple text files which sit on your computer. These cookies are safe and secure and will never contain any sensitive information. They are used only by Column Rads or the trusted partners we work with. We’ve recently updated our Privacy Policy to give you more detailed information about your rights and how we use your data.

How To Bleed A Heated Towel Rail, Bathroom Towel Rails.

Are you looking to bleed a heated towel rail?

The addition of towel rails to a central heating system has been a real popular success because they not only look good, heat towel rails and provide adequate heat for most bathrooms they also allow the simple addition of inhibitor and make bleeding the system extremely easy.

The radiator in the bathroom has always struggled with what its main function is and pretty much always ends up covered in towels. Hence the name towel radiator. This is fine but it does limit its output so we would always suggest putting the biggest towel rail you can fit in to the space. 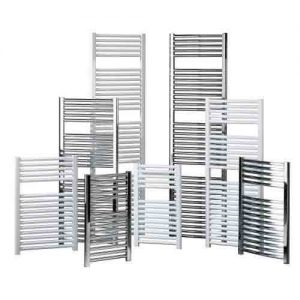 Traditional towel rails come in a number of finishes and here are Columnrads we stock and sell white, chrome and chrome curved. All of our towel rails are the highest quality with a tubular 22 mm bar that is finished and then quality check before being placed into a bubble wrap packaging and then into a box to keep them in perfect condition.

The towel rails that we sell are by far the most popular on the market but be careful as there are lots of cheaper less quality ones that have scrimped on the finish, materials and overall general finishing. The Revive towel rails are all made using state of the art German techniques on production and have two D-shaped upright feeder tubes that are individually welded to the tubes.

All of our towel rails have four tappings with two being available to be fitted with a bleed and vent on opposite sides. In most cases the flow and return for the central heating is at the bottom which leaves the vent and plug to be located on the top of the towel rail. Furthermore the plug and vent can be fitted on either upright depending how you want to be able to gain access to the vent.

In most cases the bathroom radiator can be the highest point as it is vertical and most standard radiators are horizontal. This can cause the air to build up in a towel rail so making it the ideal radiator on the system to vent first or actually entirely.

Bleeding radiators or venting a towel rail is very simple and all you require is a radiator key (bleed key) or a flat head or slotted screwdriver as most vent plugs (or bleed screw) these days have slots into the vent. Occasionally these may come with an allen-key design, but this is rare. There are some great videos online to show you and it is really simple. Many offer a full step by step guide on the process of how to bleed a radiator and fix cold spots on your heated towel rail. It might sound obvious, but you will not need to worry about this on an electric towel rail or an electric panel radiator since they do not use water.

Before you begin, it is worth checking to ensure that the radiator valve is turned on. Because TRVs (thermostatic radiator valves) are designed to be adjusted easily, sometimes these are turned off without the user knowing. Some people have been known to spend time bleeding radiators unnecessarily because either the central heating, or TRV is turned off!

You can vent a towel rail via the bleed valve (also known as the bleed nipple) anytime but it is better to allow the system to cool before as there will be very hot water in the system. It is also best to gradually open the vent by turning the radiator key anti-clockwise, and take your time to allow the air to escape and be on guard with a cloth or towel. If you don't have a bleed key you can pick one up at any DIY store. This sort of plumbing work is very easy for the DIY enthusiast to undertake- especially when all you'll need is a flat screwdriver, a bleed key and a towel to mop up the mess.

If you hear a hissing noise, this is the hot air escaping from the bleed valve. You are only going to want to vent the air and once this hissing sound has gone then you will start to get water and this is when you need to close the vent. It is always best once again to keep the screw driver or key in situ as you will need to turn it off quick once the water starts to be visible. Once you've followed this simple process, congratulations, you've successful (hopefully) managed to bleed your heated towel radiator.

Good luck and make sure that you always use an inhibitor in the system like Adey MC1 which will protect the radiators and boiler from the inside to out.