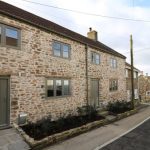 Located in the Somerset village of Pensford, these two 18th century Miner’s Cottages have recently undergone an immense renovation. Design Storey Architects, based in Bristol, set about restoring the cottages to reflect “the character and history of the building by conserving original features”.

In the 1950’s these cottages were joined together to form a single occupancy residence, converting part of the living space in Master’s Cottage into a garage and covering/removing many of the original features.

Design Storey Architects had the idea of returning the cottage to its original configuration by creating two separate dwellings which they felt was more “appropriate for 21st century living”. The cottage was divided into Master’s Cottage and Perry Cottage. The restoration, which began in the summer of 2014, saw the property stripped back to enhance original features including exposing flagstones, inglenook fireplaces and oak beams.

The exterior also benefitted from the renovation with the re-pointing of the brickwork using traditional lime with a hemp binder to improve energy efficiency. A new extension was added to the rear of both properties housing the new kitchen diner; these were clad in stained black larch boards which were in keeping with the mining legacy of the area.

Being sympathetic to the legacy was an important part of the brief for the design and architect company who were asked to “expose the original character of the cottage.” Design Storey Architects also aimed to salvage and reuse materials to minimize waste and reduce the carbon footprint of the project.

The central heating in the two properties has also had a complete overhaul with the installation of Revive Vertical Column Rads throughout both properties. Design Storey Architects felt the column radiators “complemented the style of the cottages perfectly.”
In the Master’s Cottage, mixtures of black and white vertical column radiators were used in the living room and bedrooms. For Perry Cottage, Revive Raw Metal Vertical Column Rads were used throughout.

The vertical column radiators are a perfect addition to this property as they fit in to the normally un-usable space in between windows and behind doors. The mix of white, black and raw metal radiators is a great example of how versatile these radiators are. To complement these radiators the Evolve Elegance Wave Valve sets were used which are available in a range of finishes depending on what colour radiator you choose; for example the black nickel valves were used on the raw metal and black column radiators and the silver nickel valves were used on the white radiators.

The renovation of Miner’s Cottage has recently been shortlisted for the Daily Telegraph’s Home Building and Renovating Award 2016. An online poll opens in September for the readers to vote for their favourite property with the winner announced in November.

We wish the team at Design Storey Architects the best of look for the competition and we look forward to reading the full article in the Awards issue of Homebuilding & Renovating magazine.